M18: Full Communism instead of Austerity!

Call of the …umsGanze! Alliance for the actions against the opening of the new ECB building on March 18th, 2015.
German Version

Lets begin by ending it… 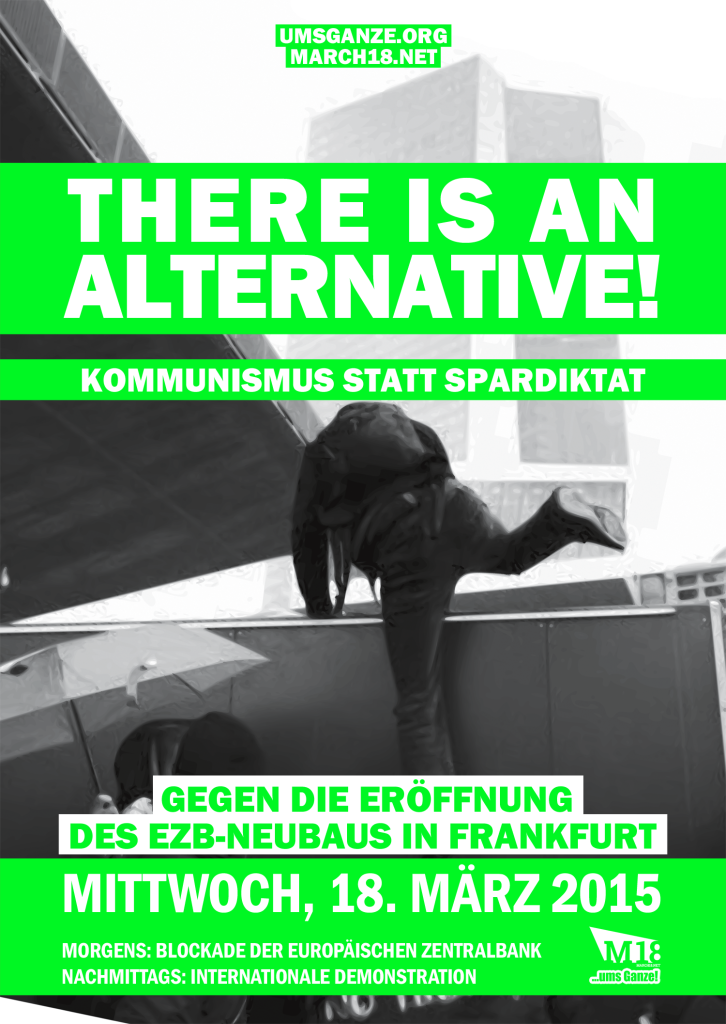 Do not go gentle into that good night,
Old age should burn and rave at close of day;
Rage, rage against the dying of the light.
Dylan Thomas

Chances are good that this century will end like Mad Max: offended but armed gangs of men in Ray-Ban sunglasses race all-terrain vehicles across desert landscapes and kill anything they can, while the cities burn in the background

The killers of Paris were these types of men, while Pegida participants in Dresden would like to be. One faction reads the Koran, while the other prefers factual texts about a lying press and the dangers of chemtrails. One group emerges from the islamicized working class, the other from the white middle class. They exhibit similar behavior as enraged citizens and authoritarian characters: when hell becomes too crowded, they pour into internet comment sections, and then onto the streets. Darkening prospects for the future are explained through conspiracy theories against their „culture,“ and dealt with by bringing destruction to others. Whether by their own hands or by demands to the state to allow even more immigrants to drown in the mediterranean sea, the result is the same: death on a massive scale. But the question that neither the fundamentalist, nor the racist citizen activist will ever ask him or herself is: Why is the world the way it is. Not to speak of actually doing anything about it. Which leads us to our subject.

Hannover as a Way of Life

Over last few years, the organized desolation that is capitalism has destroyed any hopes for a better life again and again. The Crisis and its administration has managed to bring misery and decrepitude even over some states of Europe, the poorer ones. For a majority of people the destitute circumstances have become permanent: competition as a way of life. A multitude of loans may save the GDP, but not people. Public health care has factually ceased to exist in broad parts of southern Europe – not so, however, in Germany. Life has seldom been so good for a majority here, at the expense of a global south that now practically begins in its own backyard. Still, the neoliberal chokehold has been applied here as well, not only through the Hartz IV reforms.  A new working poor – with or without laptops – have been created, and the gap between rich and poor has become increasingly large. But there seems to be no alternative to the technocratic administration of an ugly reality. A circumstance that the hamsters in their wheels proudly talk about as success.

And more. As if the christian-socialdemocratic Big Coalition had not brought enough misery over Europe, some feel that the continent is still not speaking quite enough German. Friends of the group-specific misanthropy of Pegida and AfD, for example, just can’t get enough of privileging one’s own national community. Their defense of the occident, however, is simply a perpeputation of  german dreariness: ‘a job is for life’, ‘no bread for the world, we’re not getting anything for free, either’, ‘italian way of life, but only on a TUI vacation’, ‘Yoga in the rain’, ‘couples jackets by Tchibo’ and ‘soul-searching for a trustfund’: Hannover as a way of life.

While sparks may fly here and there, more likely than the islamicization of the occident or the reign of the german mob, is that things will more or less stay the way they have in the Biergarden Eden. While islamist freaks remain a marginal security problem on the periphery, the rest will continue dealing with their dissonance with the world through the usual: after-work alcoholism, jogging, a subscription to a lifestyle magazine, World of Warcraft.

The fact that the dystopian ‘every one against every one’ that the middle class currently enjoys watching in apocalyptic cinema spectacles is actually happening on Europe’s borders is even beginning to dawn on Saturday’s multiplex visitor. The defense of the collective prosperity community is accordingly brutal. It doesn’t have to be the angry misanthropy of Dresden’s raging Nazis. The cold racism of the german bureacraucy is more than enough, and you don’t even have to take to the streets to support it. The cynicism of the majority lies exactly here – you can distance yourself from Pegida, even demonstrate for tolerance and a culture of welcoming, but simultaneously stay mute about Frontex and Lampedusa – and let the bureaucracies do their job. The ‘middle of society’ accuses Pegida of „cold-heartedness and hate“ and remains blind to the inhumanity that the pressures of capitalism produce on the streets of Athens, Madrid, and in the European border regions.

Greek Lessons in the Desert of the Real

As bad as present and future may seem – the apocalypse is not certain, nor is it certain that things must continue as they always have. What is only rarely and softly whispered in Germany – that things could be completely different – is spoken out loud by a majority in the southern European countries. The election victory of Syriza has made this clear. For the first time, a tangible rift appears in the order of German Europe. Not because state and parliament can give essential impulses to a transformation of social order, that’s not what those institutions are for. Syriza’s majority-grabbing coalition with the racists of ANEL makes this much obvious. But this is not to say, that we can learn so much from the Greeks about how to fight, or that there are so many projects there that will now initiate the transformation of society. It would be be insincere to build romantic notions of revolution on the pains of greek society. The rift in the order opened by Syriza’s success at the polls is ideological – and one that we need to widen. The fact that an end of austerity and autarky is being discussed, that capitalism is being critized here because something happened there – that is the event. And especially so because the quality press of Bild and Spiegel, in cooperation with the ruling elites, is doing everything it can to paper over this rift as soon as possible.

Reactions to Syriza’s victory were subdued in the German left as well. Those gleefully repeating that elections change nothing must now ask themselves whether their convictions have any standing in reality. Conversely, there is no reason to declare Syriza an object of self-identification, or to stay drunk on the revolutionary flavor of its victory. The informed, critical left knows that a state is not a bicycle that you can simply ride the other way after knocking its previous owner out of the saddle. There is no reason to subject oneself to the pragmatism of a leftist government „without alternatives“, but the question of how you feel about a leftist government misses the point. What is truly significant is that Syriza’s open lack of a concept does not reproduce the lie of a harmonious coming together of a new society, but objectively opens up a space that we can and must fill – because it will be closed again soon. This is a vital conclusion: no government will aid us in the self-organization beyond the markets and the state, but the conditions to do so have improved since early this year. All measures will still have to be taken against the state and its lackeys, but this state is now standing on much less solid ground. Let’s give it a kick.

The Order Rules in Frankfurt

Conditions in Germany and Greece could not be more different. On the one hand, the situation in Greece can be aided by us continuously scratching on the shiny exterior of the state of exception, and taking practical measures to ensure that there is no peace in Germany as a new storm against the ‘bankrupt state’ gathers. On the other, it is necessary to strengthen the position against state, nation and capital here in Germany.  This is a perpetual task. But both measures are afforded significant opportunities in stopping the opening of the ECB in Frankfurt on March 18th. Not more, but not less either. Because the ECB is not just any bank. It is not a business bank like the Commerzbank or some local mutual trust. The ECB doesn’t just spend the Euro bills and the necessary spare change. It does that as well. The ECB is primarily a political player on the European level. It is an important player in the political economy of European capitalism.

Their solution is a dual strategy of radical market reforms and capital-friendly monetary policy. Take the example of Greece: the so-called Troika – the panel comprised of the EU commission, the European Central Bank and the International Monetary Fund – set a thorough agenda of curtailing and privatization and monitors their implementation on the ground. If you don’t fire and „modernize,“ there are no loans. Simultaneously, the ECB is trying ensure the debt credibility of the periphery states and revive lines of credit by supplying private banks with cheap money and accepting volatile state bonds. The result: infrastructure is privatized, state and local benefits are eliminated, wages sink, the debt risk is socialized.

This is why other crisis states are trying to fight by the Troika’s austerity regime with any means – such as applying the demanded neoliberal policies themselves. The ECB is not merely a symbol for the supposedly unavoidable constrains of contemporary European capitalism. Quite practically, it stands both for the implementation of crisis policy as well as capital-friendly monetary policy, and thus has a culpability in the social desolation and catastrophic conditions in Europe over the last few years. The ECB represents the hostile politics of the European economic zone – and all these are reason enough to take to the streets on March 18th, 2015 in Frankfurt. Even if the ECB would eventually change its tone to benefit the poorer states, this would not spell the end for the capitalist imperative of an endless and insane, ever-increasing competition. On the contrary. The ECB would still be an important supporting pillar of capitalist state policy in Europe, just a different, socialdemocratic one, whose „success“ – with all the known collateral damage – must be tested on the world market just the same, and a good life for all will not be in reach until this pillar is broken as well.

If their attempt is to normalize crisis management, we should show them that our crisis is far from over, that theirs is just beginning and that the fight is only now getting started. Against the supposed inevitability of the neoliberal project, or its authoritarian formatting in the name of culture and religion, we plede our solidarity to the emancipatory struggles in Europe and beyond. The moment to aid the future, now, is more better than has been in a long time – and so is the danger of missing it. On this day, which just so happens to fall on the anniversary of the Paris Commune, we will show that the dream of a different world has already gathered on the streets  and plazas.

No applause for bullshit. Capitalism kills. But only until we surmount it. It’s up to us. All the struggles we are involved in – antifascist defense, practical anti-racism and feminism, the conflicts surrounding education and work, all the night-time actions full of anger and hope, are right and important. But on March 18th, we are taking on the streets to show that all these fights are hopeless, if we don’t recognize that they are all connected. No joke: a different, world of solidarity is possible – but it must be erected on the ruins of the old. Let’s start tearing it down.