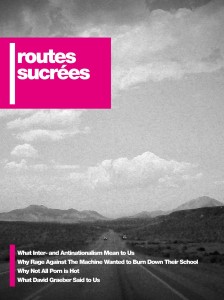 „Routes sucrées“ is an inter-/antinational leftist magazine that is being distributed for free in English-speaking countries. It focuses on providing undogmatic food for thought for a liberated society – one free of capitalism, sexism, homophobia, the state, racism and other forms of domination. One that we, for lack of a better name, would call communism. „Routes sucrées“ is the „little sister“ of a German youth magazine entitled „Straßen aus Zucker“, which has a circulation of over 100,000 copies and has been in existence for over 3 years. The newly launched English version will begin with 30,000 copies distributed via info shops, autonomous centers, activist gatherings as well as conferences and panel discussions. With it, we wish to further an international debate on how to bring about emancipation. Unlike a lot of leftist magazines we try to break information down into a form that’s easy to understand yet doesn‘t oversimplify. We are not affiliated with any party or large organization, we are a dedicated volunteer-run collective of individuals and people from the undogmatic left-communist group „TOP – Theory, Organisation, Practice.“ Our project has provided an important platform for left debates in the German-speaking world. We hope to continue this with our comrades, friends and allies from abroad!

INSTEAD OF AN INTRODUCTION

Why an internationalist antinational magazine?
“Routes sucrées”, or “Straßen aus Zucker”, is a left magazine of politics published in German – until now. Founded in Berlin in 2009 as a one-off project for young people re-acting to rising nationalist sentiment fueled by soccer World Cup and reunification festivities, the massive positive feedback it received turned it into a regular magazine. Meanwhile, eight issues have been published; our latest reached a print-run of over 115.000 copies and is read all over the German-speaking world. The articles deal with topics such as the critique of everyday life, nationalism, love, gender relations, sexuality, the critique of capitalism, religion, and much more. We try to keep our texts comprehensible – there are already enough left texts which are alienating and make you feel small.

When writing in German, however, a very important aspect is missing: international exchange. Again and again, we are surprised at how much discussions within the left are confined to language. It seems that oftentimes we only have a stencil-like image in our heads of the debates going on in other parts of the world. And likewise, when we travel we are confronted with funny ideas about what is apparently going on in the German-speaking left. But as the world needs heaps of people everywhere in order for it to be changed, we need to get in touch and understand each other. So, fi- nally, our first international issue in English. We want to debate and network. We want topics discussed across the borders of language (let alone national borders). This issue therefore contains texts on topics that are dear to our hearts.

We will collect and anonymously publish comments and debates on our website, if you‘re ok with it. Our wish for exchange and debate is grounded in two concerns we would like to briefly outline. A movement which represents our interests and ideas would have to be, among many other aspects, two things: internationalist and antinational.

Why antinational?
The most common objection we hear to our statement of being antinational is that, in the end, this is ‚our country‘ as well. Part of this is true: people as residents of a certain country do own the respective country’s passport or other official documents, making them ‚legal‘ residents. So when they don‘t manage to find a job, it is the authority of ‚their country‘ that harasses or even criminalizes them. It is ‚their‘ country which offers a world full of competition, which provides education in schools either in an understanding way, or just by hammering it into you that to make it in this society you have to struggle. All because your ‚own state‘ must compete against other nations, and unfortunately, you are all dependent on its economic success on the world market. And when times are tight, like in the current crisis, you are called upon to sacrifice ‚for the good of the nation‘, which has in fact never done you any good. And once ‚your country‘ decides any other (alliance of) state(s) to be their ‚enemy‘, and its mercenary soldiers are not sufficient, you will be the one to shoot others or be shot. Thank you very much!.

For people without a passport of the country they live in, the concept of ‚nation‘ is all the more violent. They have to protect themselves against harassment by the state on the one hand,and against racist violence on the other. You can see our concern is not that nationalism – or patriotism, for that matter – have gotten out of hand somewhere, or that the ‚wrong‘ politicians are in power. We see the problem to lie deeper, which is why we are not only ‚anti-nationalist‘, which is something liberals as well as conservatives may agree to be a good thing these days, but ‚antinational‘: Nations, and the love for them, are deadly.

Our regime goes by the name of Deutschland. For people in Argentina, it is Argentina, and in Russia, Россия. An example might illustrate the thought here: In 2012, during the soccer world championship, some wished for Greece to win, as the „battered nation needed hope and joy“. This shows what ties nationalism is supposed to mend. Social antagonisms are danced away, all the newly homeless Greeks shall, even if they have nothing to eat, at least cheer and be proud of ‚their county‘. But this pride is actually a hindrance to changing the current conditions which cause hunger and homelessness. Many people in Greece don‘t give a shit about national success as they know it won‘t better their lives. They start, within their boundaries, to take matters into their hands collectively, as done a few years ago in Argentina.

We don‘t put any hope in raising the GNP neither; because we know we won‘t see anything from it. And even those who do profit from it could be better off in a society that was more rationally organized. We reject the blabber about ‘business location’ for which we are supposed to endure austerity measures. We also reject the liberal talk that we should take pride in ‚our‘ state’s constitution, or its social legislation. It is not that we could decide which constitution in the world we liked best and then become a citizen of that state. This alone is enough toexpose the idea of the „nation as wellness agen- cy“ as a lie. We reject cheering for ‚our‘ national team, we will only call out „our“ regime’s name in commemoration of its victims. Therefore, instead of the black-red-gold the German flag displays, we might remake it into more hopeful color combinations (red and black for instance), or not give a shit about flags altogether. We don‘t need a nation, we need friends. We want good living conditions for all people, and we want everybody to be able to take part in deciding what that would mean, and not have some administration or parliament argue that bogus capitalist constraints determine that wages, welfare, and asylum seeker support are sufficient.

Why internationalist?
We see internationalism as an attempt at overcoming national frontiers. Which is why the concept as it prevails in some left circles gives us a headache: internationalism does not mean automatically supporting any resistance movement in the whole world. We do not uncritically offer solidarity with any insurrectionary movement but first ask for their reasons. We think the logic that ‚our enemy’s enemy is our friend‘ is illogical. We tie our support to the emancipatory aims which we fight for with arguments. We criticize people who are into martial habits and male dominance, request party discipline and don‘t reduce workload but want to elect the ‚employee of the month,‘ as well as people who tolerate racism and antisemitism in their midst, or reject homosexuality and transgendered people. We don‘t have anything in common with people whose critique of capitalism consists of making bankers personally responsible for all evils caused by it, nor with those who want to sustain an imaginary ‚purity of race‘, or those who only dislike dominance when it is exercised by the wrong people. Even if we happen to criticize the same dominance, we don‘t want random success, but success with our political goals. Those who forget what they struggle for just to achieve greater numbers can override our political goals.

What then do we understand by internationalism? Presently, people are divided as ‚nations‘ and ‚peoples‘. Our goal is to make all people see that these separations distract them from uniting with each other. There is only one humankind. The love of one’s ‚own‘ nation – for
any reason – is the exact opposite of the political solidarity amongst all people we want to achieve. Patriotism and international political solidarity are mutually exclusive. Patriots will, sooner or later, turn out to be our opponents as their goal is, in the end, not the liberation of all.
This explains our reasons for internationalism. Why confine our discussion within the borders we fight against, when we feel a lot closer to a feminist in Benin than to a racist in Berlin? On the other hand, capitalism’sconstitution is a global one. The anti-authoritarian communism we struggle for, which will finally have production follow needs, is unthinkable to establish in a single country. It would take little time for a military intervention to destroy, as we have seen before, any attempt at setting up conditions for a better life for all. And in a world economy based on the division of labor, one would have to support the criteria of competition and the capitalist economy to have access to things one could not produce or harvest in one’s own region, which would have an enormous effect on one’s own need-driven production. That is why we have to organize, even in times when a revolution is not in sight. In these times, when we are only a small minority, we can build up structures which function beyond language barriers. Structures which make it possible to create the forms of organization for revolutionary times, so that once events unfold, we can discuss a liberated society in the most non-hierarchical way possible, which we think is a form of communication that has to be tested and learned. How can hierarchies of knowledge be eroded, how can we make sure it is not just always the male or older ones talking? But also: how can we write texts together, so we can all understand them but without making things more simple than they are? What forms of organization could prove useful? We want to give it a try!

Are you up for it, too? Contact us! If you know a group or collective with the same aims, then let us know! Would you like to help us distribute this magazine, or know a good spot in your neighborhood that should have it for people to pick up? Get in touch, we can send you copies free of charge (though it might take us a while)! But for now, have fun reading! And if you have criticism for our articles, drop us a line, too!